I had a chance to play Atlantica Online earlier this week in-between being sick and playing Warhammer: Online. For a game that is in beta, it seems to want to be treated as a game that has been already released, claiming in its advertisements: "Love it, or we'll give cash for your character!" This caught my eye specifically and made me want to try the game, not because I wanted to love it; I figured I'd hate it, since I'm a bitter shell of a man, and could get some cash out of it. However, if you take a look at the details of the 'offer' it sounds more like they're trying to get cheap power-leveling out of their players than actually convince you to play. Offers aside, we're here to discuss my first impressions, so let's get on with it! 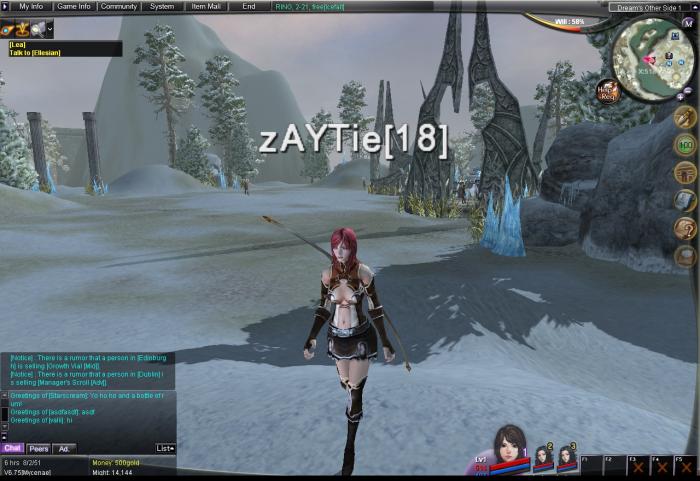 The graphics are nothing innovative. They're similar to most eastern games on the market. This game is particularly similar to Sword of the New World, a MMORTSRPG(?) I had the chance to try last year. I don't normally review games at the login screen, but this one wants Atlantica Online Gold. I had never in all my years seen a login screen with so many, many random colors. I think it was depicting a large-scale battle, but to me it seemed like an orgy of fairies and daemons on a rainbow chessboard. Once I survived the seizure-inducing login screen, it was time to create my character. Character customization is very limited, not only at the character screen but in-game as well. I only had about five hairstyles to choose from, two outfit types, and a...weapon? Well, anyway, once in-game the graphics didn't get that much better. After playing to about level 10(I think), I had gotten quite a few pieces of armor. Instead of evenly distributing them between myself and my mercenaries I figured I'd put them all on my "visible" character to upgrade his appearance. Where's my helmet? Where are the new pants I got? The character looked exactly the same as it did before I equipped anything on him.