Vindictus is one of those games that the more you hear about it, the more you want to play it. When I met with Nexon at E3 last month, I got the chance to see exactly how lovely the gameplay is in Vindictus, but I did not get a chance to get my hands on the game and play it for myself. I made sure, therefore, that Vindictus would be the first game I played when Comic-con rolled around. 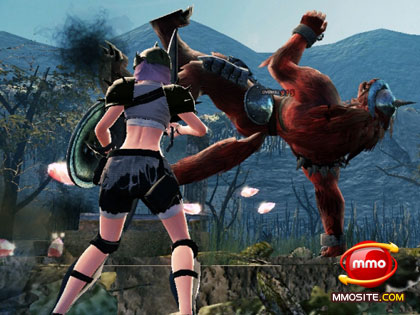 Vindictus is one of those upcoming fantasy MMOs that sport physics-based combat. What this means is that the fights in this game all feel epic, since when you swing your sword you knock down not only your opponent, but also the column he's standing next to. Need to make sure you smash his head in, but your sword has shattered? Pick up a nearby boulder and clobber him with it. Physics makes for great fun especially in the fast-paced instances you adventure through in Vindictus.

I was interested to learn more about how lag will affect this sort of twitch-based gameplay. Interestingly enough, this game will be set up much like Guild Wars, in that all combat takes place in instances. This enables parties to step into a separate area to fight, which will limit the amount of lag they encounter when fighting. It's a smart choice, but it risks the players feeling like they are not playing an MMO. A game where you only interact with other players in the cities in some ways feels like a single-player title with an online chat room/lobby component -- Like the online version of Neverwinter Nights.

How Vindictus Gold will combat this feeling of isolation remains to be seen. What I do know is that the game is definitely fun to play. The simple combat actions are easy to learn: left-click to hit, right-click to hit harder, spacebar to dash. Every character has a ranged spear attack as well, which turns out to be pretty handy when dealing with large bosses.

Hopefully we'll be able to get into the closed beta and give you more coverage of the game. From what I've seen so far, this has hit written all over it.