Now you can fly in Jade Dynasty and combat in the sky! The new expansion Ascension gives us too many surprises, flying combat mounts, new races, new factions, brand new story-line and so on. And we sat down with the developer of Jade Dynasty to talk about these new features in Jade Dynasty. You can read the whole interview below.

MMOSite: Ascension is the first expansion of Jade Dynasty Gold and has caught players’ eyes. What is Ascension? How can we ascend? What are we after ascending?

Perfect World: Ascension is the next step of evolution in Jade Dynasty. Ascending is essentially letting your character die and be reborn as a more powerful being. To ascend, a player must reach at least level 135, complete a series of quests to prove their worthiness and then speak to the Elder of Arcaneness, who will open this path to you. After ascending, players will have access to the most powerful weapons and armor in the game, as well as new items to find and quests to complete.

MMOSite: What is the background of Ascension?

Perfect World: Through mistakes and delving where they were not meant to be, mankind uncovered the secrets of immortality—that is, they discovered how to Ascend and be reborn as more powerful beings. The immortal Gods have taken notice of humanity grasping for a power they were not meant to have and have sent the Athans to deal with this problem and restore balance in the mortal realm.

MMOSite: Can you introduce the new race Athan to us? Does Athan have its own story-line, unique classes or special skills?JD Gold is useful in the game,you can buy some.

Perfect World: The Athans are a demigod race sent by the Immortals to end the human’s ascension. There are two separate Athan Factions: the Balo and the Arden. The Balo are a massive tank-like race who stand head and shoulders above everyone else and wield giant weapons. The Arden take a less brute strength approach, instead summoning pets and attacking with a bow, but are still just as deadly. If a player chooses to play as one of the Athans, they will uncover their unique story and of course will have special skills that only that Faction can use.

MMOSite: Athan and human do not born to be opponent. So what are Factions about?

Perfect World: The Athans and humans are actually enemies. If a human wanders into an Athan realm, all the Athans will attack regardless of which Faction they belong too.

MMOSite: New Factions are added into Ascension. Does that mean Ascension will feature PvP or a new PvP areal will appear?

Perfect World: There is still PvP in the Ascension expansion. In fact, the stakes have been raised, an Athan and human automatically become PvP enemies if they happen to cross paths. 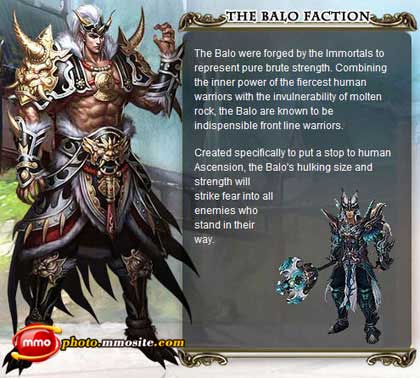