Oh how much I hate maple story. Yeah I said it but for some reason I was tempted to play this card game that nexon had made. Maybe it was because I had watched the new Yu gi oh show or maybe it was because I was watching bakugan and they have cards and what not. All I know is I was in the mood for some type of card game. I felt this would be crap and only sastify my ten minutes of card gaming. Sadly I was so wrong about this game. It has a weird system of gameplay starting off but believe me you can not go through the tutorial to truely understand the learning curve of this game. I believe that they have a great idea behind having AI's play and help you but they are sadly mistaken when they thought they made them hard. To easy to beat is the answer to that. That is why they made this an online game. So here is a quick run down of the game. You basically choose your main character. Choices of Mage,Theif,Warrior, and well some other ones. I could not help myself I just wanted to be a theif (smiles). So you they start you off with a few cards and then you can of course buy a regular set of cards which is 1000 points or you can do what I did and use the whole 2000 points and get a rare card and all together have one extra card. Alright to break this down even futher their is four main card types. The main card types are Character,Items,Monsters, and Tatics. 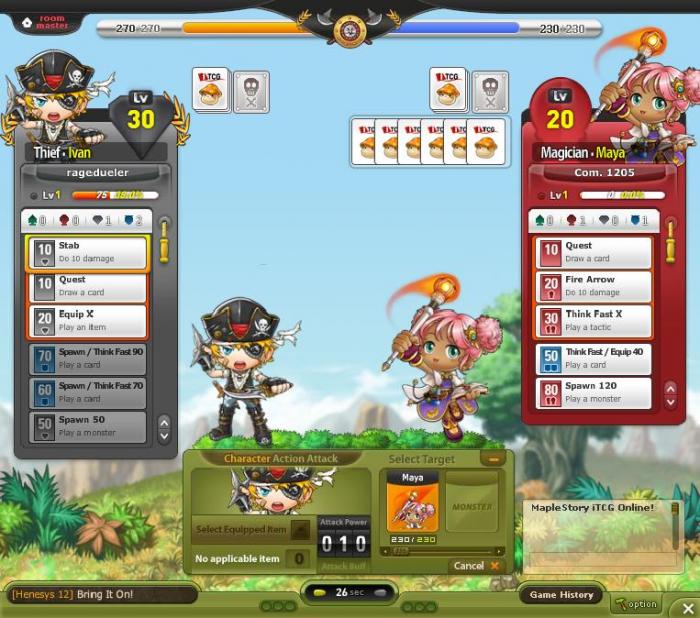 Character - Is your character you build off of. You level him in play by placing cards on him so you can summon other cards or abilities.

Items - Are pretty much your abilites that allow you to control the game. Add bonuses to your monsters or character

Monsters - They help block and attack for you or can be used in many different ways other then being placed on the battlefield.

Tatics - These are pretty much your maple story mesos spells and what not that you place on the field most of the time.

MapleStory is an online computer bol..02.14